This year the Swaton Vintage Day is celebrating their 25th anniversary on Sunday 30th June.

The Swaton Vintage Day started in 1993, missing one year due to foot and mouth. The first Vintage Day was combined with a Flower Festival, held in St. Michaels Church Swaton, to raise funds for the Church. A few local farmers thought it would be a good idea to have some old farm tractors and machinery on view for men to look at in the Paddock next to the Church. This being a great success it continued each year getting more attractions and having to move to a larger venue at Manor Farm, Swaton for a few years. The success continued and it outgrew the Manor Farm venue and moved to The Park, Thorpe Latimer, where it is now held.

In 2004 the first Egg Throwing contest commenced, which has grown into The World Egg Throwing Championships, attracting contestants from around the world, including Japan, Germany, Holland and Australia. During the time over £100,000 has been donated to local and national charities together with other good causes.

2019 is a special year being our 25th anniversary.

In addition to over 400 Vintage and Classic Cars, Land Rovers, Tractors, Motorcycles, Trucks and Stationary engines on display, there will be a Novelty Dog Show and Sleaford Ladies Rugby Club will be giving a demonstration. In the Marquee there will be Craft Stalls, Home Front Display, Photo's of yesteryear and refreshments including homemade cakes. There will be various outside Trade stands, wood carving, hog roast, fish and chips, bar, live music and and of course our flagship global event, The World Egg Throwing Championships! Children's games and rides will also be available and much more. FUN FOR ALL THE FAMILY.

On Saturday 29th June there will be a road run in the afternoon with vintage tractors, motorcyles and cars, returning to the Park for Fish & Chips, Live Music and BAR until 10.p.m.

WE LOOK FORWARD TO SEEING YOU AT THE PARK ON SUNDAY 30TH. JUNE. 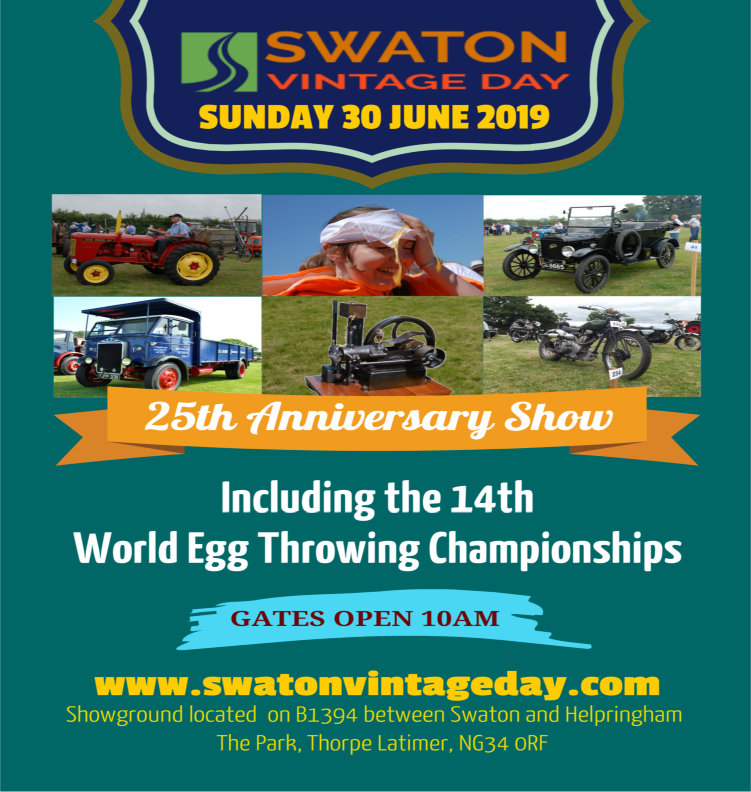